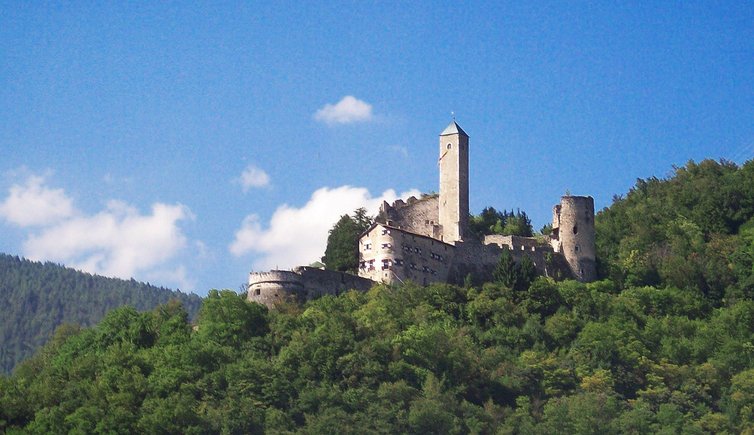 Castles and churches are one of treasures of Valsugana, forming the most important artistic and historic patrimony of this territory. Obligatory stop-over for those, who want discover the unerasable trails of their dominance.

For a long time, the castle was owned by masters of Pergine, than, after a period of  possessions, in 1531 ownership passed to the Prince Bishophs of Trento, therefore to the church of  Trentino  up to beginning of XX century,  at the end it was sold to a German company, which made some renovation work. The complex has two surrounding walls: the middle-age defence ambush  and the Renaissance-residential-buildings.  Today it is a private property, seat of contemporary art-exhibition and cultural events and concerts.
From Tuesday to Sunday 10.30 a.m. to 10 p.m.
Monday: 5 p.m. to 10 p.m.
Info:
Castel Pergine - Pergine Valsugana- Tel. +39 0461.531158 www.castelpergine.it

The Ivano Castle dates back to 590 A.D. and it is surrounded by strong walls, on the sides of which the two main buildings were erected.  The castle used to be a Roman fort. Its strategic location between the Alpine area and the Venetian plain reinforced its importance during the Middle Ages. At the end of the First World War it was bought by the actually owner, family Staudacher. , During summer there are art exhibitions and conferences.
Info: +39 0461.763432 www.castelivano.it

The Court includes a series of buildings surrounded by crenelated walls which form the courtyard close to the palace and the animal shelters. On the wall of central building you find the crest of family Trapp. They were counts of Tyrol and Dukes of Austria. The Court opens only during cultural and touristic events.

The small internal curtains connect the cut-off bastions, which used to protect the baronet residence.
The higher palace dates back to the Roman Empire, while the lower palace is gothic. It isn’t possible to visit the inner part of the castle,  but you can reach it on foot starting from Borgo city centre.

The location where appeared Castle Vigolo  was occupied by a “castelliere”, it was a refuge for primitive population in bronze age (1500 -900 B. C.) and in iron age (900-100 B.C.), like in locality Castellar and south of Bosentino. Moreover it was a fortified place, where taken up residence.
In Roman period it was a real fortified establishment, because below antique tower passed the road that collected Trento and Valsugana.  The property of this settlement  (castle)  was for a long time of countrymen, called vicini (neighbours). The castle in late middle age was even property of episcopal prince of Trento and it was allowed to neighbours use territory paying a tribute.
At the arrival of Frederick of Sweden the property was assigned to noble supporters of emperor and jurisprudence to a noble local family faithful to bishop.  Nomination of clergy proponents  depended on diocese of Feltre, as well as nomination of noble masters depended on diocese of Trento.
In 1477 family Taberelli de Fatos from Terlago took possession of castle. The actually appearance of castle owed by reconstruction in XV and XVII century, it remains not many from middle age configuration except the tower, because castle was attacked and destroyed by family Ezzelini especially in XIII century.

Situated on the top of homonymous hill, on an archaeological important area. Inside you can admire interesting frescoes from 1200-1500 recently restored. The walk to church is easy and offers a great panorama.

It was rebuilt between 1758 –and 1773 on the previous church. The most precious element of the church is the altarpiece dedicated to St. Peter and St. Paul and to the Holy Trinity, by Francesco Guardi.

It dates back to the year 1000, it was built in Romanic-Gothic style and it is the most ancient church of Valsugana. It was built on the basis of an old temple dedicated to Diana, which is still possible to admire in church.

Its frescoes date back to 1516. It was built in 1509 on a previous building. It is nowadays a morgue, thus respecting the vote expressed by the local population which had been preserved from the plague.

Built on temple dedicated to Diana and Neptun, already mentioned in XIII century. The bell might be the oldest of whole area of Pergine.

It is a frescoed capital, with frescoes by a German anonymous painter, people prey and perform pilgrimages. The capital preserves graffiti left behind by the pilgrims during their visits to the church, when they beg for grace.

Baroque church from end of seventeenth century, with octagonal structure. The church was declared national monument in memory of a terrible battle in village Carzano during the First World War.

It was built in 1436 on the homonymous hill, on the ruins of the previous Roman castle, which dominated the valley from above and controlled the ancient Via Claudia Augusta Altinate. Built in 1436 and inside you can admire the decoration with a precious cycle of frescoes of the 15th century and the majestic ceiling of the 18th century.